no man admires fear and cowardice, it’s in our genetic pool no matter what background. Man was made to fight and protect, preserve himself and those he holds closest. We are an animal, held captive by the legalities of society, brainwashed to become domesticated. It’s no wonder life is incredibly difficult for men, and especially identity and purpose. We were never supposed to live this long, domestication contradicts our purpose.

My greatest memory with Deeds of Flesh began with their 1998 release, “Inbreeding the Anthropophagi”, I remember them always delivering the goods in the brutal department, rather heavily. I have admit a lack of interest after that release, it all seemed mundane to me, repetition had definitely played its course. And I know I will receive a handful of insults for saying that, as there are a large group of people who swear on the holy Kwanzaa flying book of jihad that Mark of the Legion and Crown of Souls is their greatest contribution, but I neglect. Lets fast forward to 2008, and Deeds of Flesh release “Of whats to come…”, what can only be described as a far more technical approach, and this has only piqued my interest for the band. 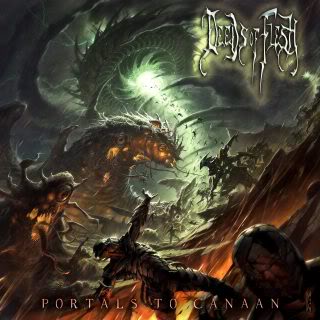 So it’s with little surprise that I was even more excited for their latest release “Portals To Canaan”, a slab of sci-fi death metal. I like the guitars in this, I like the drumming in this, I like the samples that play throughout. That’s exactly why I call it sci-fi death metal, because it’s literally like something out of this world, and they definitely capture that vibe perfectly. I could bore you with a enormous amount of adjectives to express my like of this band and this release, but it will become redundant, and I want to make this interesting, and not boring.

Great release. I give 2 thumbs up, and a mother fucking salute to the Virvum Juggernaut!

There are death metal bands that are unique to a specific sound, and they are uncompromising by the sway of change and influence. They are in and of themselves a unique product that stands individually. One of those bands is Incantation, their blend of slow doom and melodic death metal, is compared by any other death metal band in my opinion they offer a very raw and unique sound. And probably their greatest release being “Diabolical Conquest”, is what I will be talking about in this post. 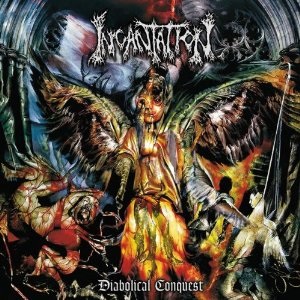 This album has so many memorable moments in its 28 minute time span. From the first track to the end of the cd, you will be experiencing an earful of something that can only be described as disgustingly beautiful. The moments of dark doom parts, and then lead into a barrage of blasts and guitar churning, all melting together in a great mix. I can’t understand a damn word he is saying, and I don’t necessarily care to. Its funny when anyone criticizes death metal as a gimmick, or they like the music but absolutely detest the vocals. And I can only say that all the pop shit on the radio and other bands, it takes as much reading the inlay with the lyrics, to really get to know what they are talking about. If I spend enough time reading the lyrics, I will be able to follow along without flaw. And why the fuck would anyone call death metal a gimmick? to me that means a scheme to make money or exploit something. Death metal is by far the worst possible career choice if you’re trying to make money. These guys who play this music, love it, breathe it. It is not something they just put out there to make a buck. I am sure they all have full time jobs, and its a huge debt to them to play this kind of music. Well I went off on a tangent, but I hope you all enjoyed.

*Oh and the artwork on this album is incredible

Beyond Creation “The Aura”

Artist: Beyond Creation
Record: the Aura
Label: Season of Mist
Year: 2011
Wiki: no?

Canada has some of the most unique and memorable death metal bands. The obvious Gorguts and Cryptopsy mentions, but we also have Neuaraxis and now Beyond Creation. The Aura is a definite traditional blend of progressive and technical, all the while abiding in the role as a death metal band. What makes the sound unique is there ability to create atmosphere in each song, think symbolic era Death. It would be impossible to talk about this band or album, without giving proper mention and recognition to the bass which carries throughout all of the songs, and is definitely a prominent figure in the overall sound.

Some of the biggest criticism’s I have heard regarding this album is that it is just a bunch of guitar wankery, I would agree if you’re talking about Necrophagist. But this album is all but minimal on the wankery scale, they keep everything contained in a well directed onslaught of sound. Not to mention every song it seems has a key element in developing atmosphere and is very memorable.

I admit I failed to give this album proper recognition when I first heard it, but after listening to it a couple dozen times, it has become of my favorite death metal releases. If I can make comparisons to Death, than it’s absolutely remarkable feat. I look forward to hearing more from this band in the future.